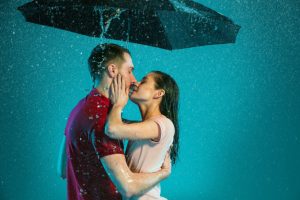 Learn how not to get hurt by men you don't trust

Surely you also went through the situation of being deceived by your confidence, of putting all your hopes in a relationship and in the end to stay with a broken heart. Even if you have heard of such situations, you still thought that "it can't happen to me". And yet, life has proved the opposite. And no matter how much you want to think you're ready for something, the truth is exactly the opposite.

This is the first question that comes to mind after going through such an experience. What is certain is that you should never blame yourself for your partner's mistakes, and you should learn something from this life experience. Don't live in the past, focus better on the moments that will follow and, especially, how to regain your confidence after you have been deceived.

You don't live in the past

When your confidence is deceived, you feel the earth slipping from under your feet. Most people who have been through this say that they made a huge mistake: they lived too long in the past and "forgot" to focus on the present. Therefore, give yourself some time to recover, but then return to your usual activities, because it will help you more than you think. Even if you feel you have nothing to fight for, don't give up. We've all been through something like this, and the power to move on is in us, so don't indulge in this situation.

Even if everything looks black and depressing now, you need to know how to move on. You may think that you will never be able to be happy again, or laugh from the heart, but trust me, you are stronger than you think. Make a change, try a new hairstyle, lose weight a little, buy other clothes, and you will see that thoughts start to take on other ... shades. Start being a little more optimistic and positive, and good things will start to happen to you. Also, if you have a new relationship, this time do not offer more trust than the respect you receive!

GET FREE eBOOK “WHAT DO MEN WANT?” 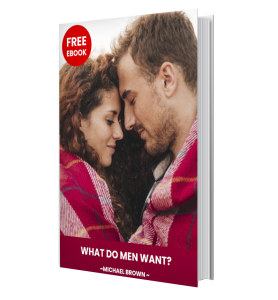 Get in his head!

Many women want to find out what is in the minds of men because they see this as an advantage, but the question is it that really so?

Even if you can't get into the mind of a man, you need to know that people are living in a community, and each of us needs to socialize.

The reasons why we socialize may be different, but in general, a man and a woman socialize mostly in order to find their other half.

How do you get into men's minds?

If you want to get into his mind, you have to play with him and enter in his head. Do not offer anything you have all at once!

Men want to be the ones to conquer, which is why you do not invite him out on a date (unless you are patient and he is blind and does not see that you want to get him out), do not give him things and information about you, do not shows him that you are stronger than him, don’t not intimidate him.

Make him lose the notion of time!

Men see any woman as a possible prey, and when they talk to a female person they start losing the notion of time. Studies have shown that if a man is attracted to a woman, he tends to prolong discussions because they want to make a good impression.

Do not destroy this desire because if you want to conquer him, allow him time to build the image he wants in front of you.

Don't rely on his memory!

If a man has told you certain things about which you have certain doubts, do not hesitate to come back to that thing after a while. Ask questions and find out if he remembers what he said or if he answers something else.

Whether you met him in reality or online, when he is already trying to get a date for which he insists, it means that you have already taken steps in his mind.

The impatience is good and it would be interesting to reject his proposal saying that you have something to do on that day to extend the waiting time a little more.

Just the fact that you do not fall into his arms so quickly, will make him even more impatient and he will start saying things and making different gestures to impress you.

If the one you talk to becomes happier when he’s around you and he shows it to those around you as well, it is a sign that his mind is doing everything possible to conquer you.

You will see him buying flowers, paying for dinner, maybe buying you something as a gift, giving money to beggars, and the list of things he can do can continue.

Happiness is clearly a sign that he want you!

We know that women think emotionally and that men think generally rationally, but studies have shown that men also have a lot of emotions that they try to hide on a daily basis and because in all cultures men have to be strong.

Have him open up in front of you and show you his true emotions, because if you managed to disarm him, that means he is 100% trusting you.

We know you want strong men, but if a man lets his guard down in front of you, you should appreciate this, because this way you will prove to him that you deserve all his confidence.

Men are extremely vulnerable to loneliness, and the fact that they flirt with every woman they are attracted to is an action they do because of the loneliness.

If you want to get into his mind, show him that you want to know more about him and spend time together. When he focuses on you, he will do his best to conquer you.

Men feel the need to make themselves useful, and you can control that. If you are a strong woman, why would you need a man?

Put it to work and when I say that, show them that you can't handle it alone and that it would be of great help for you if he could carry groceries, repair things around the house, decide on certain things, etc.

Make him your hero, the more you make him present in your life, the more he will realize that you are the woman he needs to value him.

If you want to understand how you can enter his mind, you must find out how he falls in love!

It is often said that you cannot trust others when you do not trust yourself. Therefore, learn to know yourself better, be a little selfish and do something that makes you happy, that makes you happy. You have to learn to respect yourself, and then others will. What happened is just a lesson that life has given you to help you get to know yourself better.

It sounds pretty weird, but if you were cheated, that doesn't mean you don't believe in people anymore and live your whole life like a nun. Be open to something new, but don't forget one detail: accept the risks when you offer confidence. There is no perfect man, just as you are not, so he did not have this claim from others or from his partner. It is important that everyone assumes equal roles, and that situations like the one you have faced before do not occur.

You are stronger than you think

Regardless of the situations in which you were put, you must know that you can handle it. Love is like a lottery, and few people manage to always be on the list of winners. In fact, any relationship involves a good dose of risk, you just have to learn to accept them. And, even if you had an unpleasant life experience, you are stronger than you think!

It may seem like outdated advice, or it sounds like a cliché, but know that it's not. It doesn't hurt to learn to "read" people better, because in this way you will be able to avoid many of the unforeseen situations that may occur to you, you can stay away from disappointments and much more. It's hard? Easy? It is not in vain that it is said that life is a struggle, it depends only on you which side of the barricade you are on!

All the things I mentioned above will help you get into his mind. Put them into practice and give him the challenge he needs so that in the end you will be 100% in his mind and any action he will do he would be thinking of you. 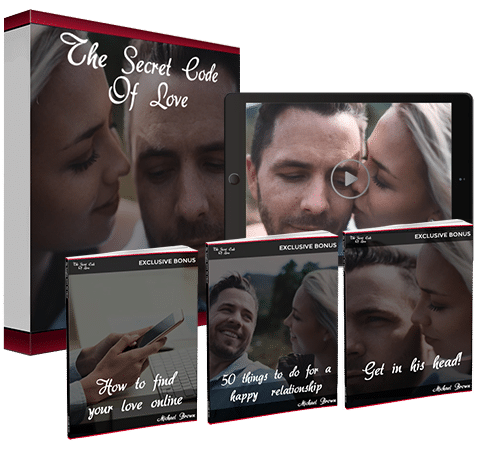 📥 Digital product, immediate access
✅ The Secret Code of Love book + 3 bonuses:
💥 Get in his head!
💥 50 things to do for a happy relationship
💥 How to find your love online
✅ AUDIO version of products
✅ FREE! Lifetime Update
✅ FREE! 24/7 Support
✅ 60 Days Money Back Guarantee! Total: $19

Get FREE book “What do men want?”
View presentation of “The Secret Code of Love”! 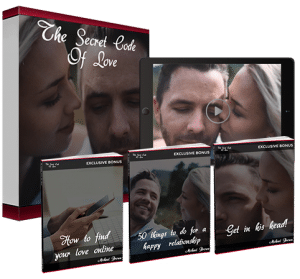